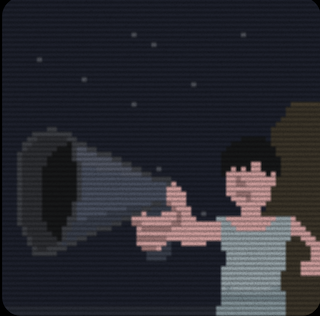 That is it, we've reached the end at last! So originally, I was just planning to have a shootout sequence once we reach the tavern, but I felt something would be missing. So you do get a bit of puzzle, just mainly using the phone to call the tavern and get the bodyguard away from the scene. I designed the sequence with spaghetti westerns in mind, in particular "The Good, The Bad, and The Ugly".

There was more that I planned to add, in particular some more interactions with the bartender or perhaps the musicians. I think that would have been nice, but everything is extra work and I was a little beat at that point. The main reason for the extra interactions would have been to allow the player to collect extra bullets / money. I just didn't want the player to be stuck, since you could waste all your money on the phone, and in the shootout sequence you could end up with no bullet. At the end, I opted to provide extra coin through the smoking lady, and have the shootout be interrupted by a boss fight. That was much simpler.

Anyway, there was a real need to reach the end piece and the big revelation. I thought it'd be funny to show that Yupa completely misidentified Baby Hitler, since he's not human. The same way you wouldn't be able to tell two monkeys apart since you're human.

The ending might have feel rushed, but to me it was more overdue than anything. The thing is, the game would have ended at the escape from the alien base, if it wasn't for having "Baby Hitler" in the title. While I did plan the whole escape from base as part of the Baby Hitler storyline, I thought it would be weird if the game ended outside the alien base without ever revealing Baby Hitler. That's why the game got stretched until you found Baby Hitler at the last minute, just like Luke Skywalker in The Force Awakens.

I hope you enjoyed the game. I'll try to make more various games, and continue the Baby Hitler storyline. As you might have noticed from the last two installments, I really like to vary gameplays, so next one might be completely different. However, I will make sure they're all part of a cohesive epic story!

Where in Space is Baby Hitler

You took Baby Hitler into space to stop the holocaust. Now suffer the consequences.