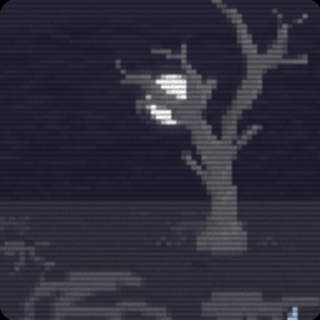 I had a lot of trouble implementing this area. I was debating for a while on how I would make it, and was thinking of reusing the dungeon crawling engine, but given that it's an open world it was impractical. Instead I developed a semi 3d engine, with a crummy implementation where I can't even put objects in the correct z-order. So yeah, objects faraway sometimes show in front of closer objects. It's a known issue and fixing that would require reimplementing that section. Can't be bothered!

I found the asteroid field mini-game quite enjoyable to make. I wanted a difficult challenge if you don't get any upgrade, but fairly comfortable with one or two ship upgrades. As I was playing, trying to judge the difficulty of that section, I thought it was pretty fun to play. The asteroids are drawn by layering geometric shapes and layering them.

The next part is a bit more fun, but the end of the game is usually the last part I implement, and by that time I'm usually kinda beat and eager to finish. Hopefully you'll find it fun to play!

Where in Space is Baby Hitler

You took Baby Hitler into space to stop the holocaust. Now suffer the consequences.